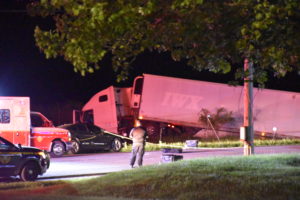 Sheriff Dougherty held a press conference and identified the driver of the tractor-trailer as 58-year-old Joshua Blessed, also known as Sergei Journev.

During the engagement four police cars were rammed and four police vehicles received gunfire damage, including a Livingston County Sheriff investigator’s car which had ten bullet holes in it.  One bullet went through the front windshield of a Genesee County Sheriff’s Office patrol car and missed a deputy’s head by inches, Dougherty said.

The driver was pronounced dead at the scene, with multiple gunfire wounds after his shootout with police; it is undetermined if any of the gunshot wounds were self-inflicted.

Dougherty declined to say what was in the back of the tractor-trailer which was owned by Yuran Express, LLC of Virginia and sent to pick up dairy products in Batavia. He also said authorities had not determined why the driver took such extreme and dangerous measures to evade police, kept driving even after running over spike strips, and also tried to to ram their cars, moving across lanes to get them and to shoot at the cars.

Joshua Blessed is readily found in social media.  He frequently posted videos on YouTube under the heading “Prophecy of Yahweh.”

“Blessed be Yahweh, Al Elohim,” he typically began.  He sometimes dressed in police uniforms, yet other posts and re-posts target law enforcement. On Wednesday night,

“There are some anti-law enforcement posts on his social media,” said Livingston County Sheriff Thomas Dougherty. “Those are the things we’re looking at. How extreme was he?”

He was born Sergia Journev. He is married with two children. He resided in Virginia.

“What was his last 24 hours? What led to such an extreme encounter with police?” said Sheriff Dougherty. “Some answers, we might never have.”

“It’s simply unbelievable that nobody was injured, aside from the suspect,” given the massive number of shots fired, the dangerous pursuit and the size and weight of the tractor-trailer, Dougherty said.

“I would call it a miracle, I honestly would,” the Sheriff concluded.