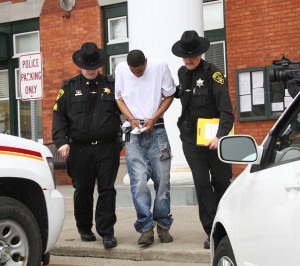 According to a press release from Sheriff Thomas Dougherty, Gay walked out of the hospital after he swallowed a large amount of what was suspected to be drugs.

The incident began when Deputy Robert Holt stopped a pickup truck at about 12:02 p.m. southbound on 390 in the Town of Geneseo because it was allegedly dragging a piece of its undercarriage, and allegedly observed that it was uninspected. Gay was riding passeger.

Deputies removed Gay from the vehicle and placed him into custody.

Deputies believed the substance to be a dangerous drug and attempted to remove the substance from his mouth for Gay’s own safety. Gay refused to spit the substance out and did swallow it and then spit the empty baggie out.

Livingston County EMS arrived to transport Gay to Strong Memorial Hospital because it was thought that he had just ingested a large amount of drugs. Gay was charged with felony Tampering with Physical Evidence and misdemeanor Unlawful Possession of Marijuana.

Dougherty said that while at the hospital, Gay was placed into restraints on a gurney but a nurse removed the restraints. Gay then walked out of the hospital but was apprehended a short time later by U.S. Marshals.

The Rochester Police Department is investigating charges of Escape in their city jurisdiction.

This is not the first time that Gay has been accused of fleeing from the Livingston County Sheriff’s Office. He was arrested in May 2014 after driving off during a traffic stop in Avon, reaching speeds of over 100 mph, and ditching his car in Livonia to flee on foot.

Gay may have fled on Thursday because he has prior felony convictions which could make a potential sentence on these charges more serious if convicted. According to the New York State Department of Corrections and Community Supervision, he spent more than three years at Five Points Correctional Facility for felony Attempted Criminal Possession of a Weapon in the Third Degree.

Gay requested to represent himself instead of allowing the court to appoint him a Public Defender. Gay said that he has irreconcilable conflicts with the Livingston County Public Defender’s Office due to a past disagreement over legal procedure with Assistant Public Defender John D’Arpino.

Gay was arraigned in Geneseo Town Court and held without the bail due to prior felony convictions.

He was returned to the Livingston County Jail and will appear for further proceedings at a later date. 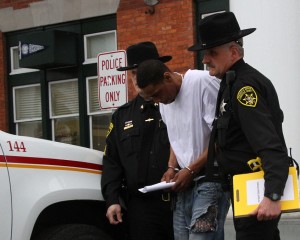