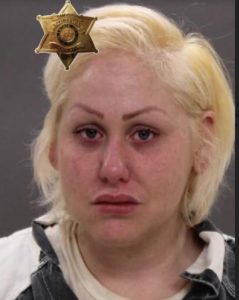 On September 14th, 2021 at approximately 10:55pm, Sheriff’s Deputies responded to the area of Middle Road, in the Town of
Caledonia, for the civilian report of an individual that left an address and was believed to be operating a motor vehicle in an
intoxicated condition.  The vehicle was located by Sheriff’s Deputies a short time later and a traffic stop was conducted on Telephone Road, in the Town of York, for a violation of the NYS Vehicle and Traffic Law.

The operator of the vehicle was identified as Rachel L. Morgan, age 39 from Webster, NY. During the stop, the Deputy Sheriff
suspected that Morgan was under the influence of alcohol. Deputy Justin Hilt, who is assigned to the STOP DWI Unit, did respond to
conduct a DWI investigation which included the performance of standardized field sobriety tests. At the conclusion of the roadside
investigation, Morgan was taken into custody for DWI.

Morgan was then transported to the Sheriff’s Office Headquarters in Geneseo where she was offered a breathalyzer to determine her
blood alcohol content (BAC) however, Morgan refused to take the test.  A records check revealed that Morgan had a revoked driver’s license as a result of previous DWI related offenses.

Morgan was arrested and charged with Driving While Int\oxicated and felony Aggravated Unlicensed Operation of a Motor Vehicle in
the 1st Degree, as well additional Violations of the NYS Vehicle & Traffic Law.
Morgan was turned over to Central Booking Deputies at the Livingston County Jail for processing and pre-arraignment detention. The
District Attorney’s Office was contacted in regards to bail due to the felony level charges. It was recommended that Morgan be
released on her own recognizance as the charges do not qualify for bail under the NYS Justice Reform Act.
Morgan was later arraigned at the Livingston County Centralized Arraignment Part (LC-CAP) at the Livingston County Jail before
Town of Caledonia Justice Mark Riggi. The Judge did release Morgan on her own recognizance, per the law, to return to court at a
later date and Deputies did set her free.

Another travesty of bail reform,” stated Sheriff Dougherty. “Get accused of driving drunk, refuse to submit to a breath test, be
driving on an already revoked driver’s license due to a prior DWI and still walk right out of the arraignment free as can be because the
locally elected Justice has no ability to set bail per the law. We need common sense returned to our courts and that starts with judicial
discretion of locally elected judges, not a one size fits all from New York City to Buffalo.”