Protesters, including Geneseo Village Trustee Mary Rutigliano, vocally opposed the decision to call Border Patrol, which ultimately led to the detainment of two adult women from Guatemala and five children, including infants. Three Town officials and now the Sheriff, on the other hand, vocally support Geneseo Police in their decision.

“Geneseo PD got it right. Probable cause for stop (speeding), no license; called Border Patrol to assist in identification process. Text book” tweeted Dougherty. “For those wanting them 2 turn blind eye to established laws, that is very slippery slope. That being said, need 2 work on immigration reform”

Rutigliano spoke with reporters in the early hours of Friday morning while at a protest advocating for the seven peoples’ release in Irondequoit and again later Friday morning.

“People are fired up. They’re calling ICE and calling congress,” said Rutigliano later Friday morning. “Geneseo is having the right response and I’m glad to be part of it.” 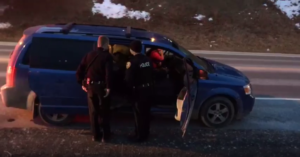