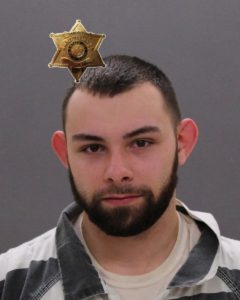 On February 10, 2021 at approximately 8:35 am, Sheriff’s Deputies responded to a business on Volunteer Road in the Town of Geneseo for the report of an out of control employee who was threatening to shoot co-workers and supervisors at his workplace.
The investigation alleges that 30 year old Nicholas A. Willey made serious threats to harm individuals by committing a workplace shooting utilizing a list he had formulated of co-workers that had upset him over the past couple of years. Further information was received that Willey possibly possessed an AK-47 assault rifle at his home.

Willey was turned over to Central Booking Deputies at the Livingston County Jail for processing and pre-arraignment detention as the offenses did qualify for pre-arraignment detention under the NYS Justice Reform Act. The District Attorney’s Office was contacted in regards to bail due to the felony level charge. It was advised that Willey should be remanded on $50,000 cash or $100,000 bond.

The incident was investigated by members of the Sheriff’s Office Patrol Division, Criminal Investigations Division, and Forensic Identification Unit under the command leadership of Sheriff’s Captain Michael Williams.