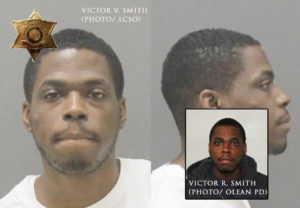 According to a press release from Livingston County Sheriff Thomas Dougherty, Victor V. Smith, 30, was pulled over for an alleged traffic violation by Deputy Shawn Whitford. After receiving the press release from the Sheriff the GeneseeSun.com researched Smith, and discovered a Victor R. Smith from Olean whom is a level-1 sex offender.

The GeneseeSun.com reached out to Sheriff Dougherty where he directed our inquiry to the Olean Police Department, who confirmed that Victor R. Smith and Victor V. Smith are the same individuals. Olean Police in conjunction with the local District Attorney are now looking into whether Smith’s latest arrest is a violation of the terms of his Sex Offender Registry requirements. According to NYS.Gov a Level 1 Sex offender is the lowest risk for re-offense and residence information for these offenders is limited to zip code information.

According to Sheriff Dougherty it’s alleged that Smith was found to be driving on I-390 in Livingston County with a suspended driver’s license and 6 previous suspensions.  It was furthered discovered by Deputy Whitford that there was an active warrant for Smith out of the East Rochester Police Department and as the Deputy was making arrangements to turn Smith over, alleges he found that Smith attempting to hide heroin in his rear seat.

Smith was then additionally charged with Criminal Possession of a Controlled Substance in the 7th Degree.

As a result, Smith was turned over to Central Booking Deputies at the Livingston County Jail for processing and pre-arraignment detention and arraigned in the Town of Groveland Court before Judge Livingston.