AVON – An accident on the 390 off ramp sent three people to the hospital on Tuesday.

According to first responders, two cars collided in the area of the 390 southbound ramp at Rte. 15 at about 4 p.m., and at least one person could be seriously injured.

Livingston County Chief Deputy Matt Burgess said at about 6 p.m. that it is still too early to tell the full extent of any injuries, but added that the Sheriff’s Office is investigating the scene as a serious-injury accident.

Deputies closed Rte. 15 in the area of Exit 9 and 390 southbound off ramp at 9 for the investigation. 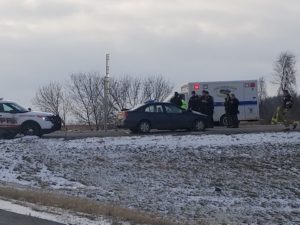