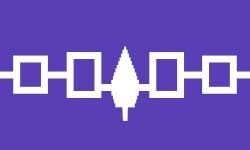 In Livingston County in the Rush-Caledonia area, the Horseshoe Solar Farm project was the focus of demonstrations held on Columbus-Indigenous People’s Day, as protestors expressed their dismay at a plan to build a 180-Watt, 4,000 acre solar farm, partially on lands which hold 12 sacred burial grounds of the Seneca Nation.

Although the Seneca nation is not anti-green energy, having invested millions themselves in solar and wind energy on their own grounds, they do oppose building such projects on sacred  burial lands.

The protest walked for several miles along Rts. 5 & 20, carrying the purple Seneca Haudensaunee flag.  They stopped at the Canawaugus sign in Caledonia, and spoke to members of the press and others there, voicing their concerns. The Seneca believe burial grounds are sacred, never to be dug up or moved, although Caucasian civilizations following often dug them up to loot for the grave goods found in them, or to make room for new non-Seneca buildings and settlements.

The Chicago-based developer issued a statement by Kate Miller which noted that Horseshoe Solar is committed to “listening to the community, and is working with the Nations and is surveying and researching the sites noted by the Nations in rush and Caledonia, adding “ Solar power is one of the safest and cleanest sources of energy, and we look forward to continuing to receive feedback and to finding effective ways to bring homegrown, affordable power and economic investment to the region with the interests of the Haudensaunee and local communities in mind.”