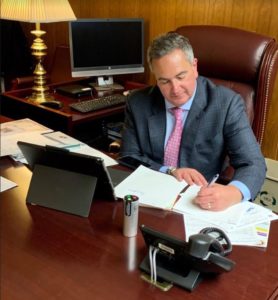 While college administrators across New York field anxious calls from students and their parents about plans for the fall semester, student housing and other issues, Governor Andrew Cuomo has given no indication of how they should respond.

Senator George Borrello told Governor Cuomo to immediately release reopening guidelines for colleges and universities. He noted that the continuing state of uncertainty is leading many students to consider opting out of the fall semester which not only will interfere with their coursework but also leave a large shortfall of revenue for  both the colleges and local businesses that cater to student populations.

“As New York businesses and communities reopen and COVID-19 infection rates keep falling ever lower, it is time for the state to release guidelines to our colleges and universities so they can act definitively by confirming reopening dates, finalizing academic options and making needed safety changes to their campus,” said Senator George M. Borrello.

“I’ve spoken with several college administrators in my district who have gone ahead and developed and submitted reopening plans but are still in a holding pattern until the state issues its guidelines. Reopening of higher education institutions is currently included in Phase 4, which will occur in early July for upstate regions and mid-July for downstate regions. If the guidelines are not issued soon, it will be a challenge for schools to make needed adjustments to reopening plans and schedules in time for the start of their fall semesters.” T

he Senator noted that the Chronicle of Higher Education has tracked the plans of 970 colleges across the country and found that the overwhelming majority – 65 percent – are planning to resume in person classes.

The remainder are divided as follows: • 11 percent proposing a hybrid model; • 9 percent considering a range of scenarios; • 8 percent planning for online classes; and • 6 percent waiting to decide.

He also noted that while businesses across the state have simply been required to develop plans that follow state guidelines and attest that they will follow them, the most available guidance for colleges and universities requires these institutions to develop and then submit their plans to the state.

Senator Borrello stated that in the interest of equity, colleges and universities should be permitted to follow the same standards as business, so they can effectively resume their efforts to recruit and retain students, without potential delays.

“Just like for our K-12 students, the rapid shift to remote learning that our colleges needed to implement during the spring semester necessitated many academic compromises, which – although necessary at the time – ultimately represented a learning loss for students,” said Senator Borrello.

“In light of that, it is more important than ever that our colleges are given the guidance they need as soon as possible, so they can finalize their fall semester schedule and implement the required safety protocols. New Yorkers made great sacrifices over the past three months to combat the spread of the virus and we have largely achieved that goal and are sustaining it with continuing adherence to recommended safety practices. Just as most of our state’s businesses are resuming operations, our colleges need the ability to plan and move forward as well. They urgently need direction from the state.”