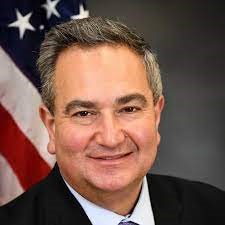 Senator Borrello made the presentation during a ceremony at the Fenton Historical Center in Jamestown. Attending the event were family and friends of Mr. Tedesco as well as local officials and fellow veterans.

“I am honored to be able to recognize Private Tedesco for his service during World War II,” Senator Borrello said. “It is gratifying to have the opportunity to pay tribute to such an extraordinary man who was part of the effort to liberate Europe from Nazi rule. He bravely and selflessly went off to war when his nation called upon him, putting his own life at risk in order to defeat tyranny. While the sacrifices he made in faithful service to our country can never be adequately repaid, with these medals, we express our gratitude and admiration.”

The son of Anthony and Rose Tedesco, he was born June 18, 1924 in Falconer. A machine shop inspector, Thomas was drafted into the U.S. Army Enlisted Reserve Corps on February 4, 1943 and reported for active duty at Old Fort Niagara one week later.

After training as a truck driver and air cargo specialist, Private Tedesco was sent to England on December 12, 1943, joining the 325th Ferry Squadron, 9th Air Force. The 325th provided passenger, mail and logistical support to all American military units in the United Kingdom.

Private Tedesco’s superiors recommended that he be assigned to military police duties. When he declined, he found himself moved to the front lines with assignment to the 347th Infantry Regiment. The 347th, part of the 87th Infantry Division, arrived in Scotland on Oct. 22, 1944, trained in England and landed in France the first week of December 1944. It moved to the front lines at Metz and went into action against German forces holding Fort Driant.

On December 10, 1944, the 347th moved near the Saar-German border. It was on the front lines when Germany launched what was to become the Battle of the Bulge. Despite strong opposition, the 347th repelled the attack and advanced, crossing the Kyll River. In continuous fighting, the unit then crossed the Rhine River on March 18, 1945.

By April 17, 1945, the division took up defensive positions about four miles from the border to Czechoslovakia and remained there for V-E Day.

On May 6, 1945, the 347th Infantry made U.S. Army history by capturing 10,242 German Army officers and soldiers, the largest part of a mass surrender of 40,000 enemy personnel that crossed into American lines. One day later, May 7, Germany unconditionally surrendered to the Allies in Reims, France, ending World War II and the Third Reich.

Private Tedesco was discharged December 16, 1945 at Fort Dix, having served one year, three months and six days of service in the continental United States and one year and seven months overseas.

“Private Tedesco’s wartime service and his humility surrounding his contributions are typical of those who are part of the Greatest Generation. He made tremendous sacrifices and laid his life on the line for our nation, but never sought attention or thanks,” said Senator Borrello. “Today was our opportunity to let him know our community and nation are immensely grateful for his courageous service.”