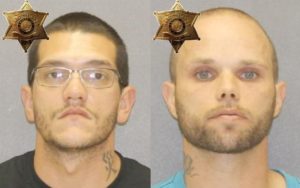 DANSVILLE –The Livingston County Sheriff’s Office arrested then re-arrested an Angelica resident and an Olean resident for allegedly packing drugs both on the road and in jail.

On Nov. 19, Deputy Shawn Whitford stopped a vehicle on Rte. 36 in the town of North Dansville for alleged vehicle and traffic law violations. The operator, Faber, of Angelica, NY was found to have a suspended license with eight suspensions. Investigating Deputies found Faber and his passenger, McCarthy, to be in possession of Suboxone. They found Faber to have a small amount of marijuana.

Both men were taken into custody and transported to the Livingston County Jail to be turned over to Central Booking Deputies.

Dougherty said that Deputies warned both men that if they had any additional drugs on them when they entered the jail, they would be charged with a felony.

Faber allegedly entered the jail and was charged with the felony Promoting Prison Contraband in the First Degree when Deputies found more Suboxone strips in the battery compartment of his cell phone.

McCarthy was charged with the felony Tampering with Physical Evidence after he allegedly tried to conceal more Suboxone strips in the crease of the seat inside the Sheriff’s patrol vehicle.

Central Booking Deputies processed both men and held them for arraignment. The District Attorney’s Office recommended bail at $5,000 cash or $10,000 secured bond.