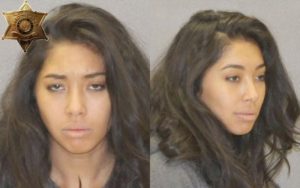 According to a press release from Sheriff Thomas Dougherty, Orie Cepeda-Willgerodt, 20, was arrested for felony Possessing Prison Contraband in the First Degree and misdemeanor Criminal Possession of a Controlled Substance in the Seventh Degree.

An outside law enforcement agency brought Cepeda-Willgerodt to the Livingston County Jail on a drug charge. Deputy Sarah Catherine Sargeant of the Sheriff’s Office Jail Division did a standard thorough search. Deputies allege that Cepeda-Willgerodt had a baggie containing what is believed to be cocaine on her person.

Deputy John Morgan of the Road Patrol Divisionarrested her, assisted by Corporal Boe Langless of the Corrections Division.

On Dec. 13, Geneseo Village Justice Thomas Bushnell arraigned Cepeda-Willgerodt and ordered her held at the Livingston County Jail on $500 cash or $1,000 bond.