LEICESTER – The search continues for a woman who went missing from her residence in the area of Perry Road.

According to the Livingston County Sheriff’s Office, Starrlita Smith, 21, is reported missing. She is described as 5’5″, 120 lbs with brown eyes and ‘very sort’ brown hair. 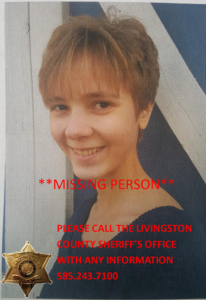