LIMA – The intersection of Rtes. 5 and 20 at Doran and Bragg Streets is considered so dangerous that no school bus is allowed to cross it.

According to our news partners News10NBC, transportation director of the Honeoye Falls-Lima School District Bill Harvey says that it is the most dangerous intersection in their district.

“None of our buses are allowed to pull out of Doran Road at all,” Harvey told News10. “Once you’re on Doran Road, you can only come out through some other means one of the other adjoining roadways and nobody is allowed to go across the intersection.”

Crash statistics show there has only been at least three crashes this year but it is dangerous enough that locals, the fire department and the school district buses avoid this intersection whenever possible.

In the 10 years that Will Zimmer has lived next to that intersection, he says he witnessed multiple collisions.

“There’s blind spots when you’re trying to get out of the two roads here,” he says. “There’s honestly now way with the way the intersection is to cut down on the amount of them. It just happened. It’s unavoidable.”

Shards of glass and pieces of the cars involved in recent crashes are scattered around the intersection.

Harvey supports Fire Chief Pribanich in his efforts to make the intersection safer. In Pribanich’s letter to the DOT, some suggestions include lowering the speed limit, shaving the hill for visibility, and no left turn signs.

“There’s various different solutions and I would like to see something done with it before someone gets seriously injured or killed. It’s just a matter of time before we have a catastrophic crash there,” said Harvey.

Kevin Niedermaier, Director of Livingston County Emergency Management, said the issue has been brought to the attention of the County Safety Board. They’re currently looking into crash statistics within the last 7 years to see what could be done with that intersection. 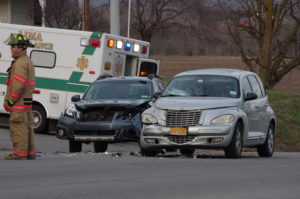