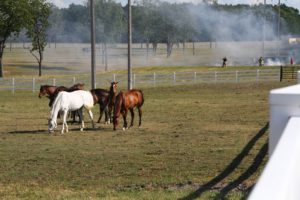 The grass fire in York on July 15. (Photo/Conrad Baker)

LIVINGSTON COUNTY – Grass fires continue to break out in Livingston County’s unseasonably dry conditions, and emergency personnel are advising the public to be extra careful when out in agricultural fields.

A total of 13 grass fires have sprung up in the county from July 6 to July 21. According to the Livingston County Office of Emergency Management, the smallest sparks can cause major grass fires in these conditions.

“A parked car on a lawn can get a fire started,” said Kevin Niedermaier, Director of the Livingston County Office of Emergency Management. “A muffler can get up to 2,000 degrees and can ignite long grass. Sometimes mowing the lawn can do it, if the blade hits a rock and causes a spark. And then there are the obvious things like discarded cigarettes and bonfires.”

The U.S. Drought Monitor has officially declared a severe drought in Livingston County. Some areas of the county report as little as 1/10th of an inch of rain in July.

Niedermaier said that these conditions are bad for fires not only because of the tinder dryness, but because the oppressive outdoor heat can beat down even the hardiest firefighter within 30 minutes.

“No time is good to have a fire, but especially in these conditions it is difficult to fight them,” said Niedermaier. “Their protective gear is very hot and they can only work for short periods, taking turns fighting the fire and getting water and a rest.”

So far, firefighters have been able to quickly knock back the flames before any people were injured or structures damaged. Niedermaier said that the public should take extra precautions to prevent further fires.

“If you’re going to mow the lawn, you want to raise the blade higher, you don’t want to hit a rock,” said Niedermaier. “Park in a driveway, not on grass. There is no DEC burn ban in effect right now, but celebratory fires like bonfires are not a good idea right now. And as always, be very careful discarding cigarettes.”

The fire in York on July 14. (Photo/Conrad Baker) 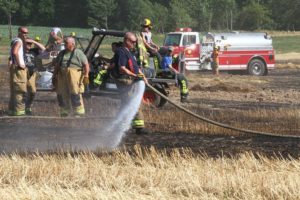 The fire in York on July 14. (Photo/Conrad Baker) 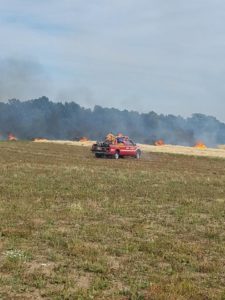 The fire in Lima on July 21. (Photo/East Avon Fire Department) 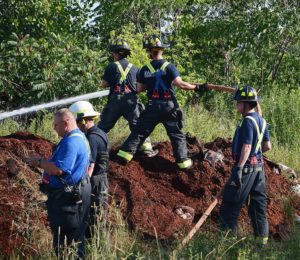 The fire in Geneseo on July 17. (Photo/East Avon Fire Department)