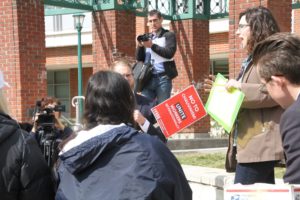 GENESEO – SUNY Geneseo student and Village Trustee Mary Rutigliano was one of a few speakers at a demonstration by the International Youth and Students for Social Equality organization protesting the detainment of two Guatemalan women last Thursday as offensive to immigrant rights.

Rutigliano took the stage on the college green to say that students can ‘make this an issue.’ The demonstration lasted for less than an hour.

“I was elected through the hard work of student organizations, you,” said Rutigliano to protesters. “There’s now a population of students who influence village, town and county elections. That’s huge. We are now a constituency that people have to answer to. Our issues, what is important to us has to be important to the people in power. It’s really exciting. We can make an issue out of this.”

“The people who are here the people who were there on Thursday, the folks who were up in Rochester, we can really shift some change on this in our local government,” said Rutigliano to protesters.” So I guess what I ask of you guys is to call your local representatives, come to our village board meeting. We have a meeting on Monday the 3rd at 5 p.m. at 119 Main Street. You can talk, you can ask to be on the agenda. Please hold us accountable. You are what makes us do stuff. You provide the change.”

Rutigliano then asked protesters to vocally support the Green light driving campaign, which advocates for people to have access to driver’s licenses regardless of their immigration status.

“At face value this can seem like a divisive issue,” said Rutigliano to protesters. “This is great for everybody. It’s great for workers who are isolated, who have to pay $50 to $100 to go to the store to get food for their families and it’s good for the state too. It’s revenue providing. It’s good for folks who are paying car insurance, their car insurance payments will go down. It makes the roads safer when you have licensed drivers who might get into an accident where if they were unlicensed would be worried about their status as an undocumented person in our country and leave to get away from the danger of these federal immigration enforcement agencies, FIEA’s. […] “Do we want to enhance the safety of our communities? Do we want to provide mobilization and community for those people who do not have it?”

Rutigliano circulated petitions to protesters and thanked them.

Rutigliano has vocally backed protesters since the evening of the traffic stop, saying that the protests are the ‘right response‘ to the detention.

Other public officials, including three members of the Geneseo Town Board, Mayor Richard Hatheway and Livingston County Sheriff Thomas Dougherty back the police’s decision to call border patrol from the stop.

There have been at least three protests in the region stemming from the events of March 23.

Mayor Richard Hatheway called a public meeting on March 25 at the Village Hall. He, Deputy Mayor Sandra Brennan, Trustee Mary Rutigliano and Trustee Matt Cook attended. Over two dozen people including SUNY Geneseo professors and students, village residents and volunteers who work on local farms attended to voice serious concerns about the decision by Geneseo Police to call the U.S. Border Patrol to help identify a driver whose only form of I.D. was a Guatemalan passport. 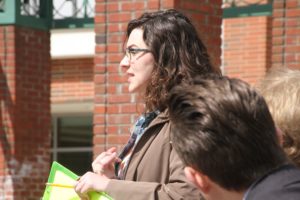 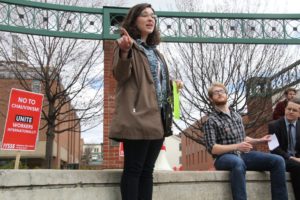