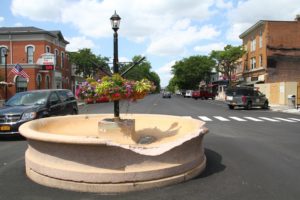 GENESEO – Liberty Mutual gave official notice to the Geneseo Village Board of Trustees that the fate of the badly damaged bear fountain basin now firmly rests in the Village’s hands.

Until this formal notice, final say on whether Moorland Studios could perform restoration work and the ultimate fate of the ruined original granite basin rested with Liberty Mutual, which is the insurer for Upstate Farms, which owned the truck that crashed into the fountain on April 7, 2016.

“Liberty Mutual say that they want nothing to do with the fountain,” said Mayor Richard Hatheway.

As to what will happen to the gigantic and non-functioning fountain base, originally installed in 1888, the Board will form a committee and possibly reach out to the public for ideas.

“The committee will have David Parish, Kurt Cylke and a member of the Board,” said Hatheway. “They will search for ideas and maybe reach out to the public, but the decision will eventually come down to the Board.”

Parish is the Village Historian and Cylke is a prominent member of the Association for the Preservation of Geneseo.

Some ideas that have been casually tossed around at prior Village Board meetings are setting the basin up in a local park as a waterfall, chipping it into little pieces to be made into jewelry or sold as memorabilia.

The basin will be replaced and the pedestal and famous bronze bear will be restored by Moorland Studios. The plan is to have the fountain completely repaired by summer 2017.