LIVINGSTON COUNTY – The three suspects in numerous car break-ins and thefts from vehicles are all being held at the Livingston County Jail.

O’Flynn said that Newton would go to public places, like parks and shopping malls, and watch for people, particularly women, who would leave personal items in their vehicles. If he saw someone leave something, the sheriff says Newton would break into the car and steal it.

Over the past few months, the sheriff says dozens of vehicles have been broken into in Monroe, Ontario and Livingston counties.

O’Flynn added that Newton would go through obituaries in the newspaper and target people at funerals.

“This might seem like a regular old smash and grab,” said Dougherty. “But when you are targeting folks that are at the time the lowest, grieving over a family loss, and they come out to smash the windows… You can imagine, not only now are they grieving, but now they are upset.”

“These crimes really go beyond a break-in of a vehicle,” said O’Flynn. “They really affect the quality of life. They result in identity thefts, forgeries and burglaries.”

To commit those crimes, deputies say Newton would use prostitutes to pose as the theft victims.

All three suspects are charged with grand larceny and criminal mischief, but more charges are expected.

“This is probably only the tip of the iceberg when it comes to the charges we expect to be lodged,” said O’Flynn. Other police agencies are also expected to file charges against the suspects. 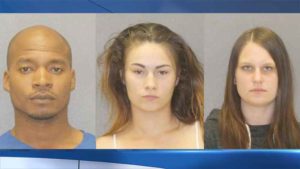