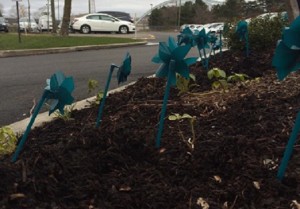 According to a press release from RESTORE Sexual Assault Services, they are partnering with agencies across Livingston, Monroe, Genesee, Orleans and Wyoming counties to call attention to sexual assault for the month of April, which is recognized as Sexual Assault Awareness Month.

RESTORE estimates that 720 people are sexually assaulted in the U.S. every day. Each of the five counties will have a display of 72 teal pinwheels, representing these the 720 daily victims with one pinwheel for every ten people.

In addition, RESTORE staff is distributing teal awareness pins to agencies in communities throughout the region. They will also host training programs about preventing child sexual abuse, and will be a presence at many events each county is hosting for National Crime Victims’ Rights Week from April 10 to 16.

Livingston County’s teal pinwheel display will go up on Saturday, April 2 at 10 a.m. and remain at the intersection of Lakeville Road and Genesee Valley Plaza in Geneseo outside of Wegmans for the month of April.

Inside the Government Center on Court Street in Geneseo, there will be a table supplied with literature on the available resources in Livingston County for those affected by crime during National Crime Victims’ Rights Week.

A ‘Stewards of Children’ workshop will be held during the evening of April 6 at the Livingston County Highway Department. Stewards of Children is a curriculum developed by the organization Darkness to Light in order to train adults to recognize, prevent and respond appropriately to child sexual abuse.

RESTORE, which was formerly the Rape Crisis Service, leads the community response to sexual violence through advocacy and education by providing the safety, support and validation that changes the lives of all those affected.

RESTORE says that 720 people are sexually assaulted every day in the United States.