NYLON – A poll of about 1,400 likely general election voters in Western New York suggests that voters overwhelmingly oppose the player protests during the national anthem and are less likely to tune into future Buffalo Bills games by nearly a 2 to 1 margin.

According to a press release from Big Dog Strategies, they in partnership with Remington Research Group commissioned the survey of 1,390 likely general election voters in Western New York. The results said that 71 percent of voters say that there is a more appropriate place for players to protest than during the national anthem, while only 23 percent support player protests during the national anthem.

“Voters are clear on one thing – they do not support protests during the national anthem and believe that there is a more appropriate place for players to protest, ” said Christopher Grant, of Big Dog Strategies. “The NFL and the Buffalo Bills have a serious problem. Because of these protests, voters are watching less football than previous years, and they are less likely to watch Buffalo Bills games. In a region where professional football is king, the crown is clearly under siege.”

The results say that 46 percent of participants are watching less football than previous years. When asked why, 71 percent say that the reason is because players are using the NFL as a stage for their political views.

The full survey is available here. 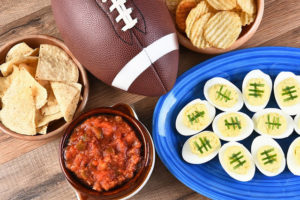