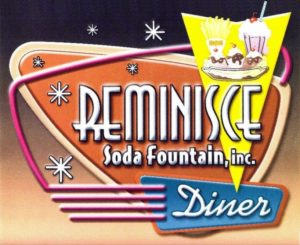 Charles Constantino, or Chuck as most people call him, wasn’t born yet so doesn’t remember the 1950’s, but he loves the era none the less.   It was during a cross-country family vacation, when he was 14 years old, that he became aware of the 50’s culture, especially on parts of the classic Route 66 which runs from Chicago to Los Angeles.  It so inspired him that he started collecting memorabilia from that time period, serving trays, Coke signs, a Coke wall clock, and a Coleman Ginger Ale (“Noted for its Flavor”) sign.

Chuck attended MCC after high school with every intention of transferring to the U of R.   But, instead, he got hired at Eastman Kodak and the rest, as they say is history.  He never looked back and hasn’t regretted not getting a degree.  After 32 years at Kodak, he was too young to retire when, in 2014, they offered a lump sum retirement package, and he felt he had to take it.

The idea of opening his own soda fountain came to him after many months of “guy night” with his friends.   A group would meet in each other’s man-cave, garage or basement to play cards, talk or just get out for the evening.  At first, the group met in his dining room, lacking any other suitable place in his home.  So, he finished off the attic with his 50’s theme collection including the red and white vinyl seats, plus a real soda fountain.  His friends realized his passion about this era and his collections, and they encouraged him to open his own place.

Even though Mr. Constantino has lived in Rochester all his life, when it came time to look for a location for his own restaurant, he had to venture outside the city.   At his present location in Caledonia, there was already a restaurant, but it had been vacant for 2-3 years.   He liked the atmosphere of the small town, liked the fact that it was at the intersection of Route 5 and Route 36, and had its own parking area around back.   The town actually changed the zoning to include his restaurant so that he could get the benefits of the “downtown” area.   These benefits included being able to apply for and receive Grants for Economic Development for Livingston County.  They helped pay for some of the improvements to his property.

Chuck bought the building and had to gut the whole place.  He likes to repurpose and reuse vintage items.  The big ceiling lights are from an old schoolhouse he got from “Rehouse Architectural”.  Other items are from “Old House Parts” in Rochester.  He rebuilt the soda fountain, that he had purchased from an antique store in Pennsylvania five years before retiring, to fit the space in the new restaurant.

Chuck has had a walk-up ice cream window since opening in June of 2015.  When Covid hit, it became a drive-thru window.  It wasn’t used much initially, but as the pandemic locked us all down, it was more popular.   He also did deliveries and extended his area from a 5-miles to a 10-mile radius.  At one point, when cars were lined up down the street, he realized that he couldn’t keep up.   He put in another phone line, doubled freezer space and fryers!   A kind, devoted customer donated and installed the plexiglass between the booths, so that when allowed to open, he was compliant.

Chuck Constantino likes to offer homemade items on his menu.   He guesstimates that over 80% of his foods are homemade.   This includes his own Alfredo sauce and a 3- generation marinara sauce recipe.  He cooks his own corn beef and has a big smoker/cooker out back to do those irresistible BBQ ribs with a special rub, and pulled pork.  Lots of times prime rib and fresh salmon are offered also.   Oh, and the desserts are all homemade, too!   His sister, Pat Schichler of Penfield, does all the baking for his restaurant; pies, cakes, and cookies.  There’s Gifford’s ice cream, too, for a real old-fashioned milkshake or sundae.

You can’t mention Reminisce without mentioning Betty Boop – the iconic life-sized wood carving in front of the restaurant.   Chuck saw her in an antique shop in Mt Morris, NY, and knew he had to have her.  Only the owner of “Carvings and More” said she wasn’t for sale.   This did not stop Mr. Constantino!   He found out that the shop owner was the mother of the chainsaw woodcarver, James Link.   A few phone calls with lots of negotiating and Betty had a new home.

Chuck has the interest of the Village of Caledonia at heart.   He’s hosted fundraisers, car cruises, Chili cook-off’s, live bands, and a drive-thru Trick or Treat for Halloween with almost 100 cars full of children.  He’s even hosted a “Town Event”.   His Chef, Will Spencer and the “Town Cop”, Todd Esterbrooks, argued for months on who had the better ribs.  They each thought their recipe and techniques were the best and continually bragged on it.  Finally, it was decided to make a big deal out of it.   In 2019, Chuck organized a benefit to help Patrick’s Place, a hospice in Scottsville, with a live band, basket raffle and five noted judges.   Over $500 was raised and the winner, Officer Esterbrooks, received a trophy, plus bragging rights!

Chuck has had to “think outside the box” lately.  He is planning a Tiki Bar under the pergola outback for the summer months.  The same woodcarver, James Link, who did Betty Boop, will be doing a tiki totem pole.   No alcohol will be served but smoothies and milk shakes and all other drinks will be available.   He hopes to have it running by summer.   And who knows, a Hawaiian luau may be in the future also!

Of course, Chuck can’t be everywhere at once.  He has a dedicated staff, some of whom have been with him since day one.   Mike Fitzpatrick of York is a server during the day and is the cook for the evening.  Will Spencer, the “ribs specialist”, cooks.   Sherri Curtis, the Chef, has been there less than a year, but knows her customers.  There are about ten other staff members.  They all are friendly and eager to please.

While this reporter was finishing eating (a delicious beef on weck!), there was a table of ladies in front of me getting ready to leave.  I masked up and hustled over.  Chuck had told me that they have been coming in regularly 3 to 4 times a week.   Karen Dykstra and Linda Hill were more than happy to sing the praises of Reminisce Soda Fountain.   Karen and her husband bring the grandkids on Sundays for breakfast and some “grandpa time”.    She and Linda stop for lunch on Wednesdays before their Bible Study….and afterwards for some ice cream.   Service is “always fantastic unless there is a busy rush” and it’s a “good, fun atmosphere”.    Both ladies agreed that the diner is a “special place”.   “They even let you sing along with the juke box”, Linda laughed.