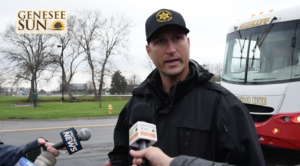 Livingston County Sheriff Thomas J. Dougherty reports the arrest of a registered sex offender after an investigation by the Sheriff’s Office.

On June 17, 2020 Matthew N. Benjamin, age 32 from Lakeville (Town of Livonia), was arrested and charged with Failure to Register and Verify, a class E felony in the NYS Corrections Law.

The New York State Corrections Law states that any sex offender shall register no later than ten calendar days after any change of address, internet accounts with internet access providers belonging to such offender, internet identifiers that such offender uses, or his or her status of enrollment, attendance, employment or residence at any institution of higher education.

The investigation and arrest was handled by Sheriff’s Investigator Connor Sanford of the Criminal Investigations Division.

Benjamin was turned over to Central Booking Deputies at the Livingston County Jail for processing and released on an appearance ticket to return to court at a later date as the charge is not a qualifying offense to be held for arraignment under the NYS Justice Reform Act.