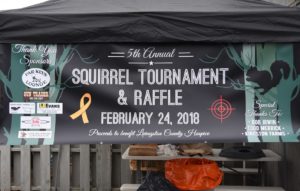 SPARTA – Squirrel hunters gathered in huge numbers for a squirrel hunting tournament to top them all in memory of kind friend and former Deputy Sheriff Branden Merrick.

“With every squirrel tournament we want to give to the organizations and places that helped my brother when he was sick,” said Kevin Merrick, Branden’s brother and a key organizer for the tournaments. “There are so many organizations that deserve our thanks and support.”

Branden and his wife, Deputy Carrie Merrick, tragically lost battles with cancer and are survived by their daughter, Hadley Grace, now 4.

Kevin and Branden grew up with a strong passion for hunting and fishing.

“Hunting was one of our biggest passions. Always was,” says Kevin. “To do something hunting-related means a lot, and a lot of people in this community are into it. For a lot of people, this is their last hurrah before spring turkey season and a chance to get together and give back to an organization that has done so much, so much for the family of their friend Branden.”

The idea was for teams of hunters to take to the woods early in the morning and check in at the Par Keys Lounge for lunch with as many squirrels as possible. 70 hunters in 35 teams brought back nine fox squirrels, 148 gray squirrels, 47 red squirrels and well over 200 chipmunks. One hunter brought in two black-phase gray squirrels.

Hunters either took their squirrels home for the pot or donated them to a local hunter and trapper, who prepares the tails to be made into commercial fishing lures and saves the meat for the table.

Anyone interested in next year’s tournament can email Kevin Merrick at kmerrick21@live.com.

The tournament is now in its fifth year. The Par Keys donated some food and served as the check-in point. Several close friends of the family cooked their specialty dishes for the occasion. The family especially thanks Todd Merrick, Kingston Farms, and Bob Irwin.

The team effort that brings the tournament and raffle prizes together every year is huge. Gun Trader in Lakeville, Dairy Knoll Farms, LG Evans Construction and Lake Beverage Corporation were sponsors this year. 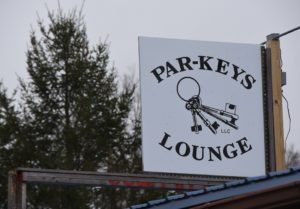