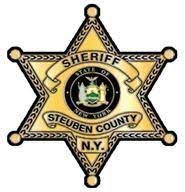 Steuben County Sheriff Jim Allard reports that on June 16th, 2022, Crash Reconstructionists of the Steuben County Sheriff’s Office investigated a one vehicle crash on SR225 in the Town of Caton.  It is alleged that a motorcycle was being operated on SR225 when a deer entered the roadway, causing a collision between the motorcycle and the deer.   The operator of the motorcycle, a 52 year old male residing in Horseheads, New York, was seriously injured and taken to a trauma center for treatment via helicopter.  The roadway was closed for a period of time in order to collect evidence and document the scene.  No charges have been filed.

Sheriff Allard thanks the New York State Police for their assistance in this case.

Sheriff Allard thanks the New York State Police for their assistance in this case.