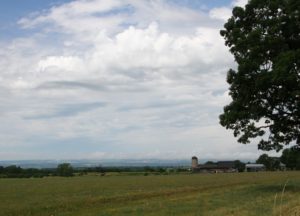 Despite the slow vegetable and grain growth and decreased milk yield for many farmers, some are finally expecting to see yields pick up, even get back on track.

“My hay yield has been down and soybeans and corn have been slow,” said David LeFeber, Avon Town Supervisor and local farmer. “But with this rain, there is still plenty of time for things to pick back up. It can still be a good year. You have to be optimistic.”

The rains will be good for all growers, not just vegetable farmers. Lawns, gardens and golf courses, to name a few, will all benefit from the ‘liquid sunshine,’ though some homeowners would argue that not having to mow or weed the lawn has been a boon. Dairy yields have also been hit by the drought.

“Cows don’t eat as much in the intense heat,” said LeFeber. “Some barns have big fans to keep the cows cool, but others are really struggling.”

In recent years, Avon has had some of the wettest summers on record, with rampant flash flooding and damage to roads and homes. Drainage and retention ponds have been installed and expanded in the Town and Village, and farm fields are ready for more rain.

“I don’t want to speak for all farmers, but this rain is very welcome, and I think we could use a bunch more, too. The ground would accept it,” said LeFeber. “That’s New York for you, if you don’t like the weather, wait awhile. It will change on you.” 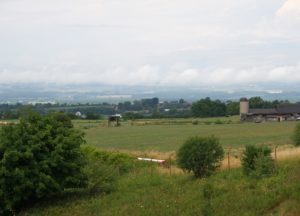