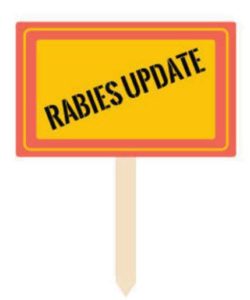 As hunting season 2020 starts with bowhunting, the DEC is warning hunters that three rabid deer have been found in  the upstate New York counties of Cayuga, Cortland, and Ontario county in the last two weeks.

In Ontario County, a deer was found Oct. 2 swimming “weakly” in a pond and DEC was called.  They euthanized the deer, and sent it to Cornell New York State Wildlife Health Program for testing, and it tested positive for rabies. In Cayuga County, a deer was found thrashing around, with no apparent injuries, but was euthanized and sent for testing, and tested positive.   In Cortland county, a very thin buck was reported circling in a residential yard and appeared to be tame and approachable; it too tested positive.

Any mammal can get rabies, and DEC reminds people if they see a wild animal acting strangely, very friendly or aggressive, to call the DEC. Anoexia, lack of coordination and/or lack of balance or restlessness are also some of the clinical signs of rabies. Rabies can be transmitted through blood and saliva of an infected animal.

Hunters are reminded to include disposable gloves in their hunting deer to use when field dressing or butchering a deer, and to discard the gloves in the trash when done.

If you see an animal that your suspect is rabid, contact the DEC Regional Wildlife Office.  Rabies is not commonly found in New York animals, but each county usually has one or two cases per year, so people are reminded to be wary of strange-acting animals.