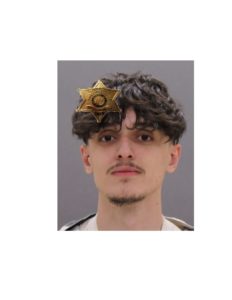 On April 26, 2022 at about 3:00pm Sheriff’s Deputies responded to the area of Sonyea Road, in the Town of Mt. Morris, for the report
of a vehicle that had fled from a member of the Mount Morris Police Department who was attempting to stop the vehicle for a
violation of the NYS Vehicle & Traffic Law. The member of the Mt. Morris Police Department lost sight of the vehicle after the
vehicle was last seen traveling north on Interstate 390 in the Town of Groveland. A short time later Deputy Brad Little of the
Livingston County Sheriff’s Office observed the vehicle traveling north on Route 63 in the Town of Geneseo at that time the Deputy
Sheriff observed the vehicle traveling north in the southbound lane and run two other oncoming motorists off the road that were
traveling south.

Members lost sight of the vehicle on Route 63 on the flats heading into Piffard. The operator’s speeds were estimated at over 120
mph and at that time the pursuit was terminated.
A short time later a citizen contacted the Livingston County Emergency Communications Center (E-911) stating that she observed a
vehicle matching the description drive through her yard and pull behind two large barns at a residence on Peoria Road in the Town of
Leicester. Law enforcement members that were still in the area responded to the address and the operator was quickly taken into
custody without incident. The operator was identified as Redi Muca, age 18 from Bronx, NY.
A records check revealed that Muca’s driving privileges in NYS had been suspended.
Muca was arrested and charged by the Livingston County Sheriff’s Office in the Town of Geneseo with one count of Reckless
Endangerment in the First Degree, a class D felony; along with one count of Unlawfully Fleeing a Police Officer in a Motor Vehicle in
the Third Degree, a class A misdemeanor, Aggravated Unlicensed Operation of a Motor Vehicle in Third Degree as well as numerous
violations of the NYS Vehicle & Traffic Law to include Reckless Driving. Muca was also charged by the Livingston County Sheriff’s
Office in the Town of York with one count of Reckless Endangerment in the First Degree and Reckless Driving. Additionally, Muca
was charged with numerous other offenses by the Mount Morris Police Department.
Muca was then transported and turned over to the Central Booking Deputies at the Livingston County Jail for processing and prearraignment detention. The District Attorney’s Office was contacted in regards to bail due to the felony level charges. It was
recommended that Muca be released on his own recognizance, as the charges did not qualify for bail under the NYS Justice Reform
Act.
Muca was later arraigned at the Livingston County Centralized Arraignment Part (LC-CAP) at the Livingston County Jail before
Town of North Dansville Justice David Werth. The Judge did release Muca on his own recognizance, per the law, to return to court at
a later date and Deputies did set him free.
The Livingston County Public Defender’s Office was present and represented Muca at the court arraignment for his defense. The
Livingston County District Attorney’s Office was notified but did not appear to represent the people.
Assisting on scene with the investigation for the Sheriff’s Office were members of the Patrol Division, Criminal Investigations
Division, Command Staff, K9 Units and Forensic Identification Unit. Also assisting was were members of the Mt. Morris Police
Department, New York State Police and New York State Park Police.