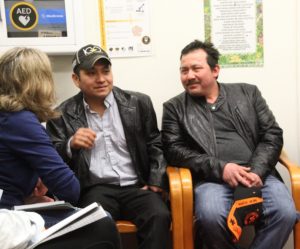 GENESEO – Members of the public asked the Village Board to make policy changes in the wake of Thursday’s detainment of migrant workers at a traffic stop on Mary Jemison Drive.

Mayor Richard Hatheway called a public meeting for 11 a.m. Saturday at the Village Hall. He, Deputy Mayor Sandra Brennan, Trustee Mary Rutigliano and Trustee Matt Cook attended. Over two dozen people including SUNY Geneseo professors and students, village residents and volunteers who work on local farms attended to voice serious concerns about the decision by Geneseo Police to call the U.S. Border Patrol to help identify a driver whose only form of I.D. was a Guatemalan passport.

“We clearly are living in an increasingly bilingual society,” said Tim McMahon, a 38-year resident of Geneseo and volunteer who frequently works with workers on Livingston County farms. “It seems that that would be a reasonable approach to try and recruit someone [as a translator] to be on the police force.”

“There was a passport with a picture. That’s a valid I.D.,” said Tony Macula, SUNY Geneseo professor. “I mean, why treat that person any different than you treat somebody from France?”

As attendees made comments, Trustee Mary Rutigliano asked anyone who spoke to identify themselves by their names and preferred gender pronouns. When Rutigliano called on an attendee raising her hand, Hatheway leaned toward her and said ‘I’m running the meeting.’

“I think a concern that I have is, I’m not sure the migrant community knows their rights,” said SUNY Geneseo student Maya Bergamasco. “So if an instance like this happens, do they know that they can remain silent or if they are asked for identification they don’t have to say anything and you don’t have to give anything if you don’t want to?”

“In these current days the outlook has kind of changed in the area for the migrant workers and their families,” said Guiterrez, a member of the Agricultural Alliance, through an attendee acting as translator. “If there’s a problem with violence happening, if we’re not feeling comfortable, we may call the police, maybe not, because of instead of helping us there might be more problems. That might not always be the case but that’s what we feel.”

Hatheway emphasized that village police stopping migrant workers is ‘not something that is normally done’ and that the village will be ‘taking a look at policy in these situations and having conversations.’

“I certainly think that things have to be done and I think we can learn from this,” said Hatheway. When a representative of the New York Civil Liberties Union, the NYS affiliate of the American Civil Liberties Union, directly asked Hatheway what and when the changes would be, he said “We will take a look at what the policies are and if they need to be addressed we can do so. I can’t sit here this morning and say this is what we’re going to do by Monday. We will have some discussions and take a look at things. And again I want to make a point that this is not something that we have dealt with in the past. This is new. So it takes some adjustment on our part.”

McMahon added that his concerns are with policy and to characterize the fallout from the traffic stop as an indictment of the Geneseo Police Department is ‘grossly, grossly unfair.’

Attendees said that no matter what happens, one of the reasons they are so interested in this specific case of migrant workers being detained at a traffic stop is because it indicates what the local police policy in such situations is and will be.

“This is like that old statement about when manager of the baseball team goes out and argues with the umpire,” said McMahon. “You’re not arguing about the call that just occurred. You’re talking about the next call.” 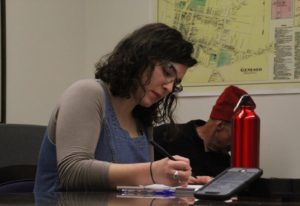 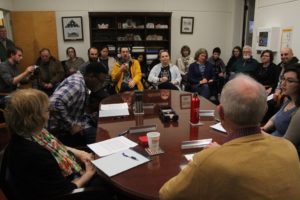