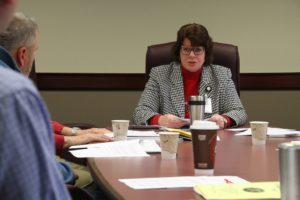 Under current indigent defense eligibility guidelines, a person required to appear in criminal, family or surrogate court qualifies for the Public Defender if they make $14,850 or less per year. After April 1, 2017, anyone making $29,700 or less will qualify. Tetamore re-iterated frustrations that this number will not include spousal income but will include spousal costs, and will not include retirements, pensions, or the value of property.

“What they’re saying is that everyone will qualify,” said Tetamore. “So there are a couple questions floating around. Some adjoining counties are not going to comply with these guidelines. There has been a memo from Judge Doran, who is the administrative judge for our district, who has told courts that these are not mandated, they are guidelines purely.”

The committee and County Administrator Ian Coyle seemed receptive to the idea.

“It’s completely illogical at the state level,” said Coyle. “Until the state addresses this in a uniform fashion, we sit tight.”

“And that may be a law suit,” added Tetamore. “That’s always a possibility. […] Maybe that’s our answer to get us some money, to get us some attention. I truly don’t know what to do with this.”

“We would have been better off being sued because the five counties who did get sued now get state aid to cover the increases to accommodate these changes, where the other 57 counties get nothing,” said Coyle.

In 2016, the Public Defender’s Office received 1,751 applications, about 50 more than 2015. If the expanded eligibility parameters were in place, they would have handled at least 86 more cases.

Tetamore identified other state-level changes to indigent defense that she considers problematic. County law also requires that the County pay for indigent defense in Family Court and Surrogate Court. In 2016, 34 percent of public defender applications were for Family Court. The new guidelines would also expand eligibility for these courts.

NYS passed a bill that takes effect Feb. 26 of this year requiring the Public Defender to represent defendants being arraigned during non-court hours, which frequently happens when police arrest a person at night.

“What they’re going to try and do is have off-hour arraignments in this county and mandate that an attorney be there to represent them,” said Tetamore. “Right now, I’m the only one available nights for off-hour arraignments. I live in Avon. If it’s a snowstorm, and I have to be in Ossian, it’s going to take me two hours to get there, if I get there at all. I don’t know how they can ask rural counties to make this work.”

“I don’t know how we’re going to physically comply with counsel at arraignment,” said Tetamore. “Although it’s very important and I agree with it, the Governor hasn’t given us anything. He didn’t give us money and he’s giving us more requirements. Truthfully, not only can we not do it as we are now, if I was my staff, I’d quit. We need another secretary because we’re so far behind. We’re drowning. This has not been good news. My gut reaction is that we don’t comply with the requirements in April. We tell the Governor, ‘no.'”

Coyle said that no action is required by the Board of Supervisors beyond a recognition of the circumstances that led up to this decision.