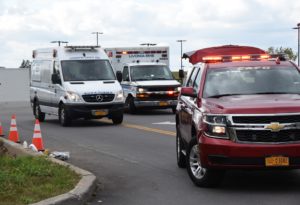 According to first responders at the scene, the emergency call reporting a male construction worker about 28 years old with a broken leg went out at approximately 3:30 p.m.

“The pipe blew off on him and broke his leg,” said East Avon Fire Chief Chris Batzel. “When we arrived we found it was a compound fracture.”

Firefighters moved the victim from the approximately three-foot trench in which he was working.

“If it was a deeper trench we would have been concerned about dirt falling in and trapping the patient,” said Batzel. “But this one was shallow and we were able to secure and rescue the patient with no special equipment needed.” 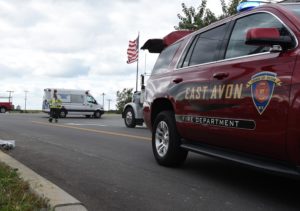