At the head of DeFrancisco’s message is dissatisfaction with incumbent Gov. Cuomo.

“You’ve got to have a leader in the State of New York that people trust and people believe is being straight with them,” said DeFrancisco. “Our current leader is not.”

He says that he is dedicated to ameliorating unfunded state mandates, which Livingston County Administrator Ian Coyle identified as one of the County’s biggest problems.

“One of the mandates that the County has is to pay for the assigned counsel program,” said DeFrancisco. “I put a bill in that would assume all responsibility for the payment of assigned counsel to the State of New York, which would relieve the counties of a substantial amount of burden. Millions of dollars in every county. The Governor vetoed it. You have a right to counsel, at arraignments, at least, and the state should pay for it, not every county. We negotiated during the budget process and a partial state takeover happened. That’s something concrete that I helped counties with unfunded mandates.”

He says that his visit to Livingston County as part of many appearances across the state as he seeks Republican candidacy for Governor.

“Livingston County is a county in the State of New York, and all the counties in the State of New York has a say in who the Republican candidate is going to be,” said DeFrancisco. “I’m going to every county that allows me to come in because the person with the most votes from the state committee people will come together and make a decision. Every one is important as far as I’m concerned.”

DeFrancisco did say that it will be difficult for him to get the Republican endorsement for Governor. However, he says he is willing to give it a shot.

“Anyone can easily find out what my record is, I’ve been around awhile,” said DeFrancisco. “I’m throwing the name out. It’s tough for somebody from upstate to get a nomination let a lone win an election for Governor as a Republican, but I got enough chutzpah to give it a shot and see what happens.” 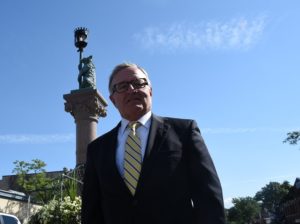