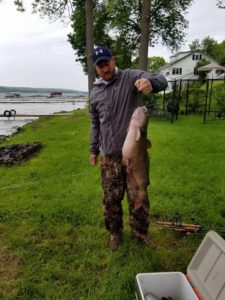 LAKEVILLE – Some folks fish Conesus Lake their whole lives and never see a catfish. Not so for a lucky angler over the weekend’s pike fishing tournament.

“It’s tough to say for sure if this is the biggest catfish ever caught on the lake,” said Ted Decker of Ted’s Tackle in Lakeville, the weighing-in official for the tournament. “People fish on the lake all the time but there are no official records kept. But this one’s got to be way up there. That was really, really cool to see.”

The ‘channel cat’ is New York State’s largest catfish. The DEC calls it ‘a formidable sportfish.’ Channel cats can top 20 pounds, are excellent fighting fish, and are very good to eat. Yet despite their attributes, relatively few New York State anglers seek them.

Catfish in general are specialized for muddy, low water situations, but channel cats are known to favor larger, cleaner bodies of water than their cousins, like, say, the bullhead.

They also differ from bullheads in their nesting habits. Rather than make a depression in the bottom, channel cats make a tunnel. The tunnels are usually built under logs or in other protected areas where the water is clear. The male guards the eggs and young.

Channel catfish are most active just before sunrise and sunset and feed most actively at night. Due to their larger size and their preference for clearer water than other catfish, adult channel cats may eat more live fish than bullheads and have even been found to have birds in their stomachs. Locating food in such dim light could be difficult without their characteristic ‘whiskers,’ or ‘barbels,’ on their faces, which act as taste and touch sensors that help find food on the bottom. Catfish have a very diverse diet, generally eating any object they can get their mouths around. Their major foods are insects, crustaceans and fish.

If you happen to catch a catfish, watch out for their spines! This is a defense mechanism unique in the fish world. One spine is at the front of the dorsal fin on its back, and the other two are on each of the two pectoral fins just behind the head, on the sides of the belly. These spines can be locked into position perpendicular to the catfish’s body, making it difficult for other fish to eat them. Despite this unusual defense, however, catfish are eaten by bass, walleye, other catfish, snapping turtles, and fish-eating water birds.

Channel cats play an important role as a food fish in the United States. They are raised for food on huge catfish farms in several southern states. Their exceptional ability to quickly turn food into flesh makes them perfect for this purpose, making the culture and sale of catfish fillets a major agricultural industry. Southern catfish fillets are found in many New York State supermarkets. 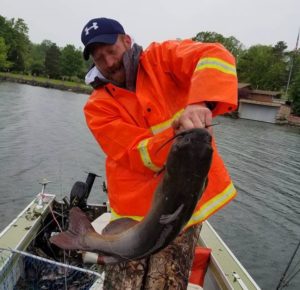