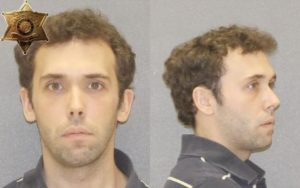 On Nov. 30 at about 9:10 p.m., Deputy Scott Patterson responded to Richmond Mills Road in the Town of Livonia for the report of a vehicle parked roadside. Upon arrival, the Deputy found a vehicle off the roadway and into a yard with the engine running, the vehicle in gear, and a male individual in the driver’s seat, slumped over unconscious.

The Deputy allegedly saw a hypodermic needle cap on the unconscious man’s lap. EMS was immediately requested for a possible overdose. The man regained consciousness and was identified as Ozzello.

EMS transported Ozzello  to Rochester General Hospital for evaluation since he allegedly complained that he bumped his head when the vehicle left the road.

The Sheriff’s Office alleges that Ozzello verbally admitted to using heroin prior to driving home to Livonia from Rochester. Several hypodermic needles and a bag of what is believed to be heroin were located in the vehicle.

Ozzello was checked at the hospital, released and taken into custody by Deputy Connor Sanford of the Sheriff’s Office STOP DWI Unit.

Ozzello was transported to the Livingston County Jail and turned over to Central Booking Deputies.

Ozzello posted his bail and was released to appear in court at a later date.