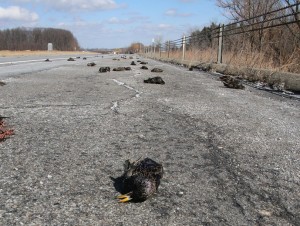 AVON – A local flock of starlings took a blow over the weekend when approximately 70 of its members were killed by a passing vehicle or vehicles on 390 in Avon.

The odd scene left some drivers scratching their heads. Wildlife experts with the New York State Department of Environmental Conservation said that vehicle strikes on starlings are not unheard of and can take out numerous members of a flock at once.

“Starlings are prone to mass kills like that because they fly in such dense flocks,” said Mike Wasilico, Wildlife Manager for DEC Region 8. “If you get a thousand or so birds feeding close to the road and they all take off at once, it’s easy to see how a tractor trailer or multiple vehicles could hit a lot of them. Sometimes the birds can get caught in the airfoil around a vehicle and killed that way.”

About 70 starlings could be seen on both shoulders of the road and in the roadway at mile marker 55 on 390.

However, few birders are shedding a tear for these birds. Starlings are an invasive species native to Europe. They travel in dense flocks of thousands, competing with native birds for food and space. They can rob farmers of berries, cherries, and grapes.

They are one of only seven species of wildlife which can be legally killed at any time of year without limit by anyone with a hunting license in New York State. 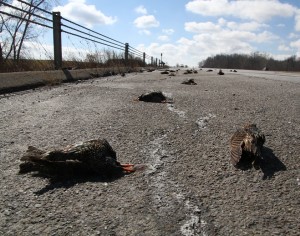