GENESEO – Police are still invstigating why a loud ‘explosion’ noise allegedly shook the area of Avon Road in the wee hours of Easter Sunday.

Residents of the area described generally as the vicinity of North Street, Rorbach Lane and Highland Drive say that a loud noise like an ‘explosion’ startled them at about 3 a.m. Sunday.

“It sounded like a bomb and a building falling or a large tree snapping off and crashing through the woods,” said Village resident Geoff Staley.

“It is an active investigation,” said Geneseo Police Chief Eric Osganian. “One of our officers and a Livingston County Sheriff’s Deputy investigated with nothing found. No property damage and no evidence of a gun being fired. The officer and Deputy checked the area, including the Fox Run Apartments, with nothing found. We do not believe that this poses any danger to the community.”

Anyone with information about this incident is encouraged to call the Geneseo Police Department at (585)245-2420 Ext. 4. 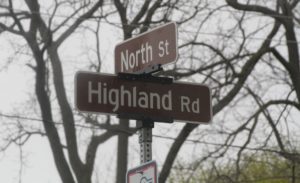 North Street and Highland Road, in the general area of the Village where the noise was described.
(Photo/Conrad Baker)