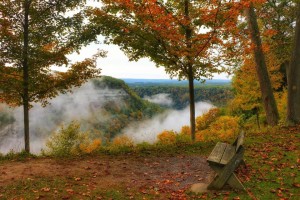 According to a press release from NYS Police in Warsaw, the two children are identified as Preston Giangregorio, 6 and his brother Dylan Giangregorio, 9.

Preston’s body was found on Sunday. The search continues for Dylan.

On June 11, 2016, at 7 p.m., seven people went over the lower falls at Letchworth State Park, five of which were rescued and transported to Strong Memorial Hospital with injuries varying from serious to minor.

Throughout Monday June 13, 2016, Underwater Recovery Team from the State Police and Livingston County Sheriff’s Office, assisted by Adventure Calls Rafting, Inc., have continued searches of the Genesee River below Lower Falls at Letchworth State Park. State Park Police Officers and Troopers are also actively engaged at the scene of Saturday’s accident, with support from Pike Ambulance.

As of June 13, 2016, 4:30 p.m, Monday’s searches have not yielded any additional findings, and searches will continue on Tuesday of the same area.

Areas near and around the lower falls at Letchworth State Park are closed at this time.

This is an ongoing investigation and the names of the parties involved are not being released at this time.