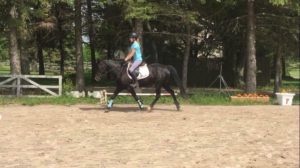 GENESEO – A WWII plane, drones and dozens of volunteers searched for two days for the pony that bolted from the Genesee Valley Hunt Races on Saturday.

According to Marion Thorne, <> of the Hunt, a child was trying to mount the pony, Jasmine, when the saddle slipped.

“The girth wasn’t tight enough and the saddle slipped under her. She was excited and took off,” said Thorne. “She had to make a few jumps to get where she went, but it’s really no big deal for a horse to jump like that. Sometimes horses stop at fences, sometimes they don’t. She’s accomplished and has jumped four foot six. She’s quite a nice pony.”

In the two days that followed, friends and neighbors searched the expansive woods and fields surrounding the race field on Nations Road.

“People were out looking like crazy,” said Thorne. “People on the ground couldn’t find any sign of her. They used drones. Austin Wadsworth went up in one of his planes that day to look. It was a great community response and I’d like to thank them for that.”

Turns out that Jasmine was happily wandering and grazing in the fields and woods west of Rte. 39, Avon-Geneseo Road.

“She grazed and drank from puddles,” said Thorne. “She was absolutely fine just wandering, even though there was rain one night. I’m sure she found a sheltered spot. She just lived as a wild horse for a couple days. But people were really concerned, and eventually she turned up in Susan Kelly’s horse pasture at Big House Stables.”

The saddle was still on her, hanging upside down on her belly.

The equestrian community is breathing a sigh of relief at her safe return.

“Horses take off sometimes but we’ve never lost one,” said Thorne. “She .” 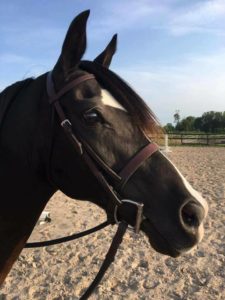