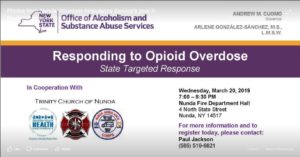 State Attorney General Letitia James reported that a Pittsford doctor, Sudipt Deshmukh, 55, was recently indicted in Monroe Country for second degree, manslaughter and other felony charges, as the result of an overdose death of  one of the doctor’s patients.

According to the report, Deshmukh prescribed a lethal cocktail of opioids for a patient known to be struggling with addiction. Deshmukh was a primary care doctor in the case.  In addition, Deshmukh was charged with two counts of reckless endangerment and six counts of criminal sale of a prescription for a controlled substance, as well as Health care fraud for having the insurance company pay for medically unnecessary prescriptions.

According to James’ office, the doctor rarely did examinations of patients who showed clear signs of drug addiction, and prescribed opioids upon request , between 2006 and 2016, without any legitimate medical purposes.  Among drugs prescribed were Oxycontin, methadone, morphine, and fentanyl.

The grand jury of Monroe County handed up the indictment on Thursday. Feb. 18. The top charge against Deshmukh is a class C felony, with a maximum sentence of 5 to 15 years imprisonment.