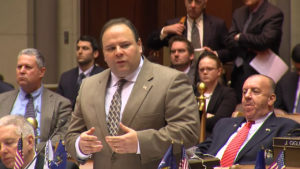 Assembly Minority Leader Will Barclay today announced that Assemblyman Phil Palmesano (R,C,I-Corning) has been named as the Minority Conference’s representative on the Legislative Task Force on Demographic Research & Reapportionment (LATFOR).

Every 10 years, following completion of the U.S. Census, New York’s election district lines are redrawn to determine boundaries for congressional and state legislative offices. The Legislative Task Force is made up of six members, including four legislators and two non-legislators. Each conference leader appoints one legislator, while the Assembly Speaker and Temporary President of the Senate each appoint one additional non-legislator.

“Redistricting is always a critical undertaking for New Yorkers and for the state’s electoral process,” Leader Barclay said. “I have every confidence that Phil Palmesano will be a strong voice on this task force. His diligence, experience and knowledge will serve our Conference well as the panel conducts its work.”

“I am honored to represent our Conference as part of the Legislature’s redistricting efforts, and I thank Leader Barclay for the trust and confidence he has placed in me,” Palmesano said. “The redistricting task force plays an essential role in how voters choose their elected leaders and the makeup of congressional and legislative seats. I look forward to working with my colleagues on the panel and getting started on the job ahead of us.”

Palmesano was elected to the Assembly in 2010 and represents the 132nd Assembly District, which includes the majority of Steuben County, all of Schuyler and Yates counties and portions of Chemung and Seneca counties.

He was appointed Assistant Minority Leader in 2020 and is the Minority’s ranking member on the Assembly Energy Committee. In addition, he also serves on the Corporations, Authorities and Commissions, Corrections, Insurance and Ways and Means committees.