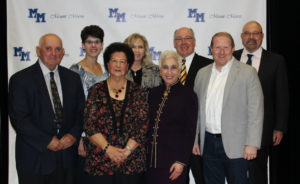 A selection committee which included representatives from the school district and the community reviewed each of the nominations and selected inductees.

Adam Harter (‘90) is a Vice President for Pepsi and he leads the sponsorship programs for the NFL, MLB, NBA, NHL and NASCAR. Adam was named by Billboard Magazine as one of the top 100 Most Powerful People in Music.

Terry Flynn, (‘81) was appointed by President George W. Bush to serve as a United States Attorney. He is currently a partner in one of the nation’s top law firms, Harris Beach.

Sam Bozzette, (’72) is one of the nation’s leading researchers with over a dozen articles published in the New England Journal of Medicine. Most of his career has been spent with the University of California as a Professor of Medicine and as a Senior Scientist at the RAND Corporation.

Maryann Correnti, (’70) is the Chief Financial Officer at Heinen’s Fine Foods. She is also a Director at University Hospitals Richmond Medical Center.

John Correnti, (’65) was a leader and pioneer in the modern American steel industry. He served as President, Chief Executive Officer and Chairman of the Board of numerous steel companies. He most recently founded Big River Steel.

Chuck DiPasquale, (’61) is currently Mount Morris’ Town Supervisor. He was the Chief of Police in Mount Morris for 35 years, and the first Criminal Justice teacher at the Charles G. May Center.

Jerry Gehrig, (’58) was a teacher in the Keshequa Central School District for 30 years. He was known throughout the county as C-3, his designation as the Deputy Coordinator of Livingston County Emergency Management/Fire Investigation. He spent 56 years as a member of the Active Hose Company of the Mount Morris Fire Department.

Mary Ann Dalrymple, (’51) spent 41 years with Five Star Bank (Wyoming Count Bank) and rose to the position of Vice President. She managed the Mount Morris branch for 31 years and she achieved and maintained an 85% market share.