Hundreds of fighters, bombers and torpedo planes with the Imperial Japanese Navy Air Service descended on the harbor, raining thousands of bombs and torpedoes on non-combatant American ships and planes. Loss of life was extremely high. The next day, President Franklin Roosevelt declared war on Japan, and the United States joined Europe to fight World War II.

“We lost a lot of ships and more sadly we lost over 2,000 sailors,” said U.S. Navy Veteran Sterlin Harris, who volunteers his time at the National Warplane Museum in Geneseo to preserve the legacy of American military history, including the attack on Pearl Harbor. “The next day, we declared war on Japan. I was three weeks old when Pearl Harbor happened.”

The National Warplane Museum preserves American military history and heroism with a collection of flying aircraft and static displays, all cared for by volunteers like Harris. On this day, he encourages young people to also volunteer their time to learn more from the machines and objects familiar to their ancestors who gave so much.

“This whole museum is about keeping history alive and making it come alive so younger people can understand just what those behind us did and sacrificed for our benefit,” said Harris. “Younger people we especially like to volunteer and come down and learn about airplanes, learn about the history, and the ones that have come here love it and keep coming back and are an integral part of our volunteer force.”

For Harris, today is about remembering the sacrifices of his fellow sailors.

“I feel honored to be part of the tradition of the Navy and the heroics that were demonstrated at Pearl Harbor by my fellow sailors,” said Harris. “My hat’s off to them for what they endured and what they went through and the efforts they made to save as many sailors as possible. And may God bless them all.”

Federal agencies and interested individuals or groups, like the National Warplane Museum, fly their flags at half staff today for Pearl Harbor Remembrance Day. 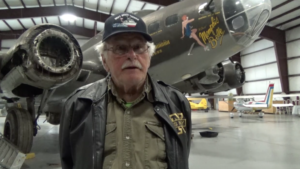