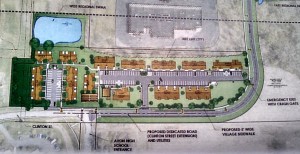 PathStone’s plans for the project.

AVON – PathStone Corporation, the developers of a proposed apartment complex in the village, are holding a public Q and A tomorrow, April 15 to address public concerns about the project and its potential effects on the community.

The public can ask the developers any questions they have about the project starting at 4:30 p.m. at Peppermint’s at 244 East Main Street.

“We would like to reach out to folks and answer questions not usually answered at the planning board level,” said Robert Cain, a real estate developer with PathStone.

The Village Planning Board is heeding the advice of consultant John Steinmetz for the project.

At a special presentation on Jan. 11, Pathstone laid out the basics of their plan to construct a 60-unit apartment complex between Clinton Street near the Avon Nursing Home and the shopping plaza behind Tom Wahl’s.

At that presentation, several local residents voiced concerns that the complex would about PathStone not paying full taxes, increased traffic on school days, flooding, altering the atmosphere of the Village, and PathStone’s ability to build a road behind the project to connect Clinton Street to the shopping plaza behind Tom Wahl’s and two water retention ponds to alleviate flooding, as promised.

Residents are petitioning via change.org against the complex. As of Thursday evening, the online petition has 561 supporters towards its goal of 1,000.