AVON – Local communities are explosively backing an idea to carry the season of giving forward through the new year with a massive volunteer effort to deliver many thousands of delicious golden mac and cheese meals to local food pantries.

The spark started when Partyman Catering, located in Avon, decided to push a mac and cheese drive with the Outreach Program, intending to raise enough money to donate 10,000 mac and cheese meals.

“We’ve had an overwhelming number of volunteers and donors,” said Megan Dexter with Partyman. “At first we wanted to raise enough for 10,000 meals, but we hit that in just three days, so we thought why not make it 20,000? We got to the 20,000 mark so now we’re kind of going for the gold and trying for 30,000 meals. It’s amazing the response we’ve seen on this.”

The low-cost, easy-to-serve mac and cheese can provide thousands of meals. Early estimates are that Partyman will put out about 10,000 meals per hour to food pantries from Avon to Dansville.

The idea is to provide meals to those in need after the holidays. Dexter and Kirchhoff are working with Amanda Osborn at Partyman to make it happen with the Outreach Program.

“Food pantries and other community organizations see a lot of donations around the holidays, which is great,” said Kirchhoff. “We wanted to do something to continue that spirit after the holidays, into the new year.”

The Outreach Program is enthusiastically accepting donations. Partyman says that checks can be made out to The Outreach Program and mailed to Partyman Catering at 1515 West Henrietta Road, Avon, NY 14414. Partyman volunteers will also come to pick up a donation if you prefer. Just call them at (585)438-4321. 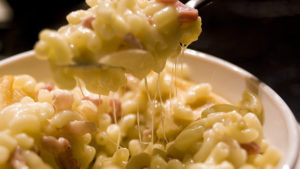