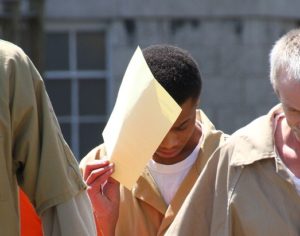 LIVINGSTON COUNTY – Over 40 police officers and members of the legal community watched as a County Court Judge sentenced a man to prison for brutally beating and injuring a New York State Trooper in the spring of 2016.

Judge Robert Wiggins sentenced Tyshawn Jones, 20, of Brooklyn, the man who viciously attacked and injured young Trooper Robert Hoyt on the side of Rte. 5 and 20 in April 2016, to 5 years in state prison and 3 years of post-release supervision. Hoyt and District Attorney Greg McCaffrey asked the judge to sentence Jones to the maximum of 7 years in prison.

“As we wrestled for what seemed like minutes for control of my weapon my mind drifted to all of the promises that I’d made to my wife to come home safe, to watch my 7-year-old daughter grow, to have my 1-month-old daughter know who I am,” said Hoyt, who grew up in Lima, to Judge Wiggins. “I know in my heart that if I did not fire my weapon that night, Mr. Jones would have killed me with it. […] On April 13 I had to make the toughest decision of my life. Now you have a decision to make. To sentence anything other than the maximum sends a message to law enforcement in this and other counties. If there is no punishment, what is there to deter someone from becoming violent in an attempt to escape?”

“I’m very fortunate to have grown up in a law enforcement household. 10 to 15 years ago, it seemed that everyone in the country looked up to police as the good guys,” said McCaffrey. “Now something has changed. There is almost a war on police, and every traffic stop could become a life-threatening situation for law enforcement officers. […] There is some talk of a violent felony override which would allow Mr. Jones to take advantage of several programs while he is incarcerated. I think that he should have to sit on prison for the maximum term and not avail himself of any programs.”

“The man before you is a 20-year-old high school graduate who intends to continue his education,” said Quintilone. “When Tyshawn took this plea, it was with the understanding that his sentence would be no less than 4 years and no more than 5. […] I would also submit that these programs are designed to help people transition from incarceration to be productive members of society.”

Quintilone also extended Jones’ request to the court that his hair not be cut in prison due to his religious beliefs.

“I understand that all of you folks are here in support of your fellow officer,” said Judge Wiggins. “For me, this is a very difficult case. Despite your awful, violent, stupid involvement, there is no criminal record. […] Your perception of them [police officers] is clearly off. Maybe that’s societal. Maybe that’s where you’re from or how you grew up. […] There’s a reason there’s a blindfold on Lady Justice. As a statement, this [crime] can’t be tolerated. But I’m not supposed to make statements. The sentence of this court is 5 years with the Department of Corrections and 3 years post release supervision.”

Captain Rick Allen, Troop E Commander of the New York State Police, said that he understands why the sentence was not the maximum.

“Incidents like this happen on a daily basis, and we can’t tolerate it,” said Allen. “We get reports of police being injured constantly. We were just informed of the deaths of two police officers in Orlando. […] We would have liked to see 7 [years], but I also understand that the judge sees a man with no criminal history.” 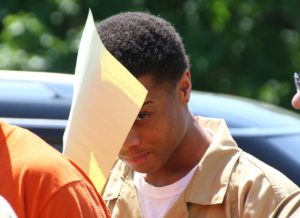