Livingston County Sheriff Thomas Dougherty released an advisory Tuesday that skimmers are thought to have stolen card information from customers of local gas stations, especially in Livonia, Avon, and Lima, and that the scammers have been using the victims’ money at Walmart stores statewide.

Most if not all of the more than 20 scams are thought to have started at local gas stations since Dec. 14, 2017.

Investigators are looking for a common source for the victims of the theft and are working with area gas stations to ensure that gas pumps have not been compromised.

Dougherty urges residents to check their credit card activity for any suspicious activity and to alert their bank and contact the Sheriff’s Office at (585)243-7100 if any unauthorized activity has occurred.

– Paying in cash is the most effective defense against skimmers.
– Use a credit card, not a debit card, since credit cards have better fraud protection, and the money is not deducted immediately from an account.
– If using a debit card at a pump, choose to run it as a credit card rather than punch in a PIN number.
– Check to make sure the gas pump dispenser cabinet is closed and shows no signs of tampering.
– Choose the pump closest to the station’s clerk. Thieves often place skimmers at pumps farther away from the store.

Skimmer scams were in the local spotlight in November 2017 when the Avon Police Department located and removed skimmer devices from the Exxon Mobil gas station on the circle in the Village. 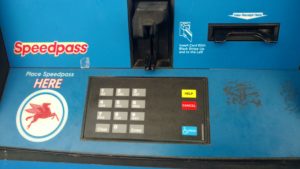