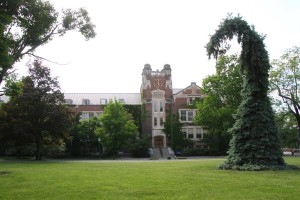 The letter is in response to the discovery of a swastika and the word ‘Trump’ inside a residence hall on Nov. 12, the letters ‘KKK‘ apparently written in mustard on the college gazebo on Nov. 30 and harassing text messages allegedly sent to students over this period.

Further events are planned to unite the campus community against hate messages.

The letter is as follows. Bolding and capitalized text are the decisions of the letter’s original authors:

unite to REAFFIRM OUR COMMITMENT to the Geneseo mission in the strongest possible terms. Geneseo is a community built on values of diversity, inclusiveness, & civic responsibility. These values are constants, no matter how contentious the political climate.

The recent presidential campaign did not create nativism, racism, sexism, Islamophobia, anti-Semitism, or other ideologies of hate, but it legitimized & valorized them. Incidents during the past two weeks, across the nation & on our own campus, raise troubling questions about the apparent normalization of intolerance, bigotry, xenophobia, & hate. With one voice, we UNEQUIVOCALLY CONDEMN THE RESULTING THREATS which have been made—whether implicit or explicit, symbolic or overt—against the safety of our students & of the wider campus community. These threats are unacceptable. We also recognize that these hate crimes are only the most recent & visible aspects of persistent issues of racial & cultural  insensitivity at Geneseo. We cannot be, or be perceived to be, complacent in the face of this.

WE STAND IN SOLIDARITY with all those who have been targeted by these hate crimes as well as with those who fear becoming targets. We celebrate our students: Black & Native American, Muslim & LGBTQ+, Jewish & immigrant, Latinx & Asian, neuroatypical & first-generation college
students, those with disabilities, & all women within & beyond these groups. Know that you belong here, that you are a rightful part of the Geneseo community, & that we value your presence.

No matter our field of study, we as scholars know the dangers of any attempt to normalize white supremacy, bigotry, inequality, & misogyny. We also know that these kinds of hatred can & must be combatted through a sustained commitment to critical thinking, humane discourse, & generosity of spirit. We recognize our moral, ethical, & professional obligation to protect our students, our colleagues, & our community. WE CANNOT HIDE FROM THIS. WE REFUSE TO.

We believe that this election & its aftermath must motivate those of us committed to civil rights, democracy, inclusion, & equality to find new ways to communicate & to educate. We must follow in the footsteps of those who have fought tirelessly to resist & reject racism, bigotry, misogyny, patriarchy, & discrimination on the basis of religion. We stand ready to work with those who are willing to foster a Geneseo community that is MORE SUPPORTIVE, RESPECTFUL & INCLUSIVE of all.

Visible, sustained, collective action is needed to begin addressing the concerns of all those who feel unsafe on our campus or in our local community, & all whose confidence in Geneseo’s achievement of our mission as ‘a diverse campus community marked by mutual respect’ has been damaged by events of the past weeks. WE, THE UNDERSIGNED, RECOGNIZE OUR FUNDAMENTAL RESPONSIBILITY to engage in such action: to encourage all members of the community to actively listen to the concerns of others, to offer our unqualified support to those who have been affected, & to visibly, consciously demonstrate our Geneseo values in our behaviors toward one another.

The letter is signed by: