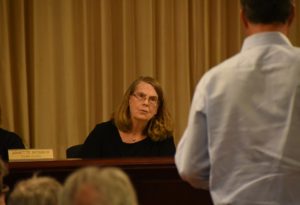 CONESUS – Town residents took the Town Board to task for what they feel is an obvious attempt to push the court-halted Myers Inn project forward, which the Town denies.

It was a full house and then some at Tuesday night’s Town Board meeting, packed to capacity at 99 with over a dozen others waiting outside. The meeting included a public hearing for modifying the definition of ‘legacy business’ and ‘discontinuance’ in the Town Code. The proposed changes will go before the Livingston County Planning Board on Thursday, June 8 at 7 p.m. at the Livingston County Government Center at 6 Court Street, Geneseo. The public hearing opened with comments from Town Attorney Dan Magill.

“I’d just like to thank everybody for being here. I firmly believe that public participation in the local government is a load-bearing pillar in our constitutional republic,” said Magill. “I just want to address a few issues that have been in the media. Number one is the fact that the outcome or these amendments to Zoning Code have absolutely zero bearing on the current Article 78 proceeding relative to the construction on East Lake Road. In that matter, the judge has not made any rulings in writing and there has been no determination that the building is illegal. And also, just to set the record straight, as it stands today, the building, the construction on East Lake Road, does not violate any provision of the Town of Conesus Zoning Code.”

Approximately a dozen people chose to take the podium and speak during the public hearing, including: John Tantillo, the attorney for Robert Siracusa, Sally Hirth, and Tom and Trish Bruckel, immediate neighbors to the project; Zoning Board of Appeals member Mari deWit; and Town Councilman Donald Wester.

Two Livingston County Deputy Sheriffs were at the Town Hall during the meeting. There were no incidents or apparent threats to public safety.

With the exception of Wester, all speakers implored the Town Board not to move forward with these redefinitions as they currently are. Many attendees, including  re-iterated concerns that the building does not fit with the character of the lake, is not the project proposed to and approved by the Town Planning Board and the public, and moving forward with this change to the code sets a precedent for ‘bait and switch’ tactics by the Town Board for large projects.

“Initially I’d just like to state again on the record, the members of the public who wish to attend this hearing exceed the fire capacity and as a result, the Town Supervisor has told those members of the public to stay outside during the hearing and come and speak, maybe, later. This does not satisfy the requirements of a public hearing set forth both in your code and the New York State Code, and any action taken at this meeting does not satisfy the requirements for a public hearing to be held for any amendments,” said Tantillo. “First and foremost, this is terrible public policy, whether or not it’s an attempt to push the Meyers Inn. We think this is an obvious attempt to legalize the Meyers Inn but we believe it won’t. As we’ve seen from the beginning of this case, there are numerous legal deficiencies and pressing the matter further will only result in more costly litigation for the Town.”

Mari deWit, vice chair of the Town ZBA, came out publicly against the project.

“I was involved from the beginning from when variance was needed for that building, which is now this…this ugly construction,” said deWit. “I drive by it twice a day, I have seen the drawings as they were suggested for what we saw. This is not what we saw on those drawings that were presented to us for a variance.” Attendees applauded. He continued, “I was shocked one day when I drove by and the whole thing was gone because it was supposed to be a remodel, this thing and that, a new roof was going to be done, a canopy was going to be done, and one day everything is gone. I was like, ‘what the heck?’ And the next thing I know, there’s this big steel construction. It’s like, how did that happen? So I’m kind of in shock just like everybody in town here and I don’t think that it should be approved the way it is. It should go back to what the original idea was, to have something that blends in with the view from the lake or view from the street. And this is not the way it is supposed to go forward.”

Councilman Wester took the podium and faced the Board to say that he will not be influenced by ‘false information’ or ‘threats.’ As he decided to take the podium, Donohue reminded him that he did not have to stand at the podium and could stand at his seat if he wanted.

“I want everybody here to know, including the Board, that my position is that I will gather all of the facts regarding the legacy law and the full intent of the law,” said Wester. “I will not be influenced by incorrect information, false information, threats or intimidation. I am sure all of the Town of Conesus constituents, that’s the Town, the hamlet, and the lake residents, […] we are here as people. We are here to live together and be united. I will vote in the direction that will be in the best interest of the entire Town of Conesus and its residents. I stand firm that all future businesses and residents stay and proceed within the law with the guidance from our attorneys, Planning Board, ZBA and code enforcement department. I as a Town Board member do not have any influence, by law, to influence any decisions. Though my final vote may not make everyone and anyone happy, I choose my vote and my decision will be made with courage, conviction, honesty, integrity, for the best interests of the Town of Conesus to keep moving forward.”

Resident Jim Szczesniak asked both sides of this battle to lay down their legal weapons and work it out.

“We can’t afford to go forward with litigation on every project and every decision that’s made in life,” said Szczesniak. “When you look at this, we need businesses to support our community. […] At the Town Board, figure out a way to compromise. Figure out a way to work on this. Those that are opposed, get it out of litigation. Figure out how to work. We need to make it happen for the people of Conesus and for the businesses.”

The public hearing on the proposed changes is still technically open until the Town’s next meeting. Comments can be submitted in writing to  townclerk@town.conesus.ny.us. 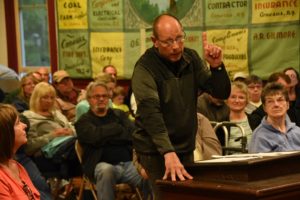 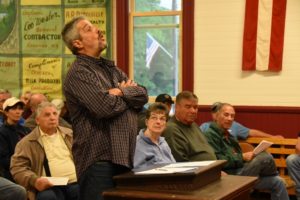 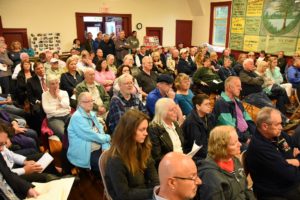 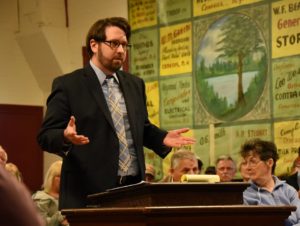 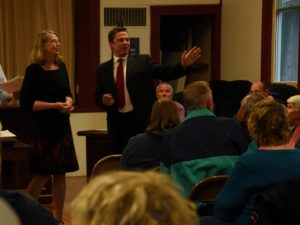 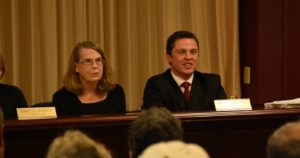 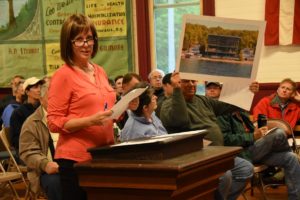