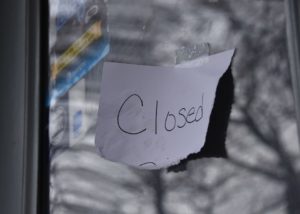 GENESEO – Hundreds of dear friends shared one last happy hour at their quiet home away from home Thursday night.

After 37 years as one of Main Street’s fundamental meeting places and businesses, Club 41 enjoyed one last hurrah and closed its doors for the final time.

Future spouses met at Club 41. Lifelong friends met and reunited there. Business owners, elected officials, and college students all tossed one back and solved the world’s problems together. All were welcome, and kept coming back and back and back.

The Club’s real charm is in its people. The unassuming, lethally witty ‘Boss’ Mark Thielges and his infallibly sharp and elegant wife Susan were the life of every party. They originally met there, and Susan asked Mark on their first date. Their many friends formed the Club’s welcoming core regulars, which grew into a vibrant clientele. Swinging open the light wooden inner door at 41, you knew you would be taken care of and always have an ear to talk to.

The building itself, 41 Main Street, forms one of the bones of Geneseo’s main drag. It was built in 1827 by Solomon Frost, described in 41’s history records a ‘an early merchant.’ In 1829, Frost sold it to prominent attorney William Hamilton, who kept it until 1855 when it was purchased by Hezikiah Allen, who managed the Wadsworth estate. He made various expansions and improvements so that when it was sold in 1864 to Harmon Howe, proprietor of the large American Hotel that stood just to the south, it contained ‘eight fine large rooms.’ He connected the two buildings with a hall and closed up the remaining space. Clarence Youngs purchased the entire property in 1876. In 1886, fire destroyed the original American Hotel but left 41’s brick walls standing. Former Sheriff Elijah Youngs purchased the burned remains for $500 and rebuilt it with a mansard roof. After his death in 1895, the house passed to another son, E. Fred Youngs, who lived there with his wife, Martha Doty. They added the famous front porch in 1896. Youngs passed away in 1919, and Doty sold 41 to to Miss Ida Stewart, who ran it as a tea room. Later that year, she sold it to Mrs. Harriet Green, who reopened it as the ‘Fallbrook Inn’ specializing in chicken dinners. Dr. Julia Delehanty bought it in 1941 and used it as her physician’s office and residence for many years. Many of 41’s regulars remember going to checkups there as kids. In 1971, it was sold and became an Italian restaurant below and two apartments upstairs. In 1981, three local investors including Thielges purchased it and built ‘The Club 41 Sportsman’s Pub and Players Lounge.’

Its final closure represents a profound change for the Village and for me personally. It was at Club 41 that I as a college student met Josh Williams, with whom I would enjoy a fruitful professional partnership and friendship for three formative years. Today, Friday, is my last day as Co-Owner and News Director for the GeneseeSun.com.

And so with a heart heavy for the closure of a true sanctuary for many of my dearest friends and an eye turned to bright new horizons, Conrad Baker brings you this one last story from the GeneseeSun.com. 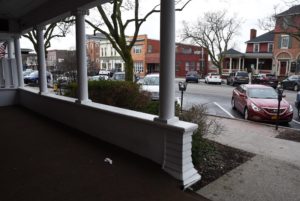 The view from the porch. (Photo/Conrad Baker) 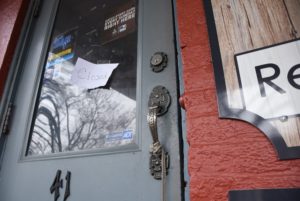 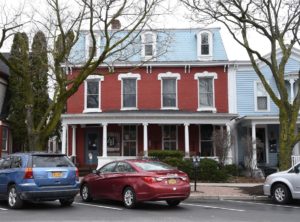 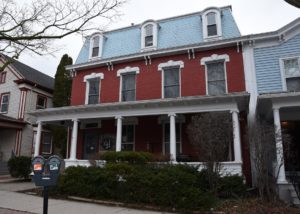