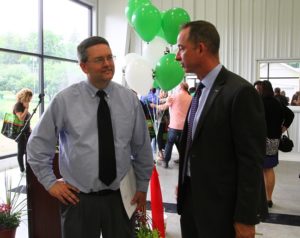 NUNDA – One of Livingston County’s brightest businesses has its eyes on the horizon after cutting the ribbon at their brand new peanut butter production facility on Thursday.

“This expansion is critical for the future of our company to be price competitive in the organic peanut butter market,” said Bob Gelser, General Manager and President of Once Again Nut Butter.”If the price of peanuts fluctuates, it affects our prices and distribution. Since 95% of our peanut products are organic, this means a lot to us.”

As a rare employee-owned operation, the employees themselves have a strong stake in the expansion.

Gelser said that Thursday’s ribbon cutting is the culmination of more than five years of work and coordination between Once Again Nut Butter and its county and municipal partners. Dave Thompson was a Nunda Town Council member when the first talk of this expansion began to circulate.

“It was back in 2011 when the first letter went around,” said Thompson. “Once Again was looking for a place to build this, and we sold them these six acres. They worked with the Village too and hooked into the Village water and sewer system. We are very happy to have the benefit of this great business here. It puts us on the map, puts people to work, it increases the tax base, the list goes on and on.”

“We provided a mortgage tax extension and property tax abatement, resulting in substantial savings for the business,” said Bill Bacon, newly appointed Director of the IDA. “We look forward to seeing Once Again Nut Butter continue its success.”

Once Again Nut Butter purchased the land from the Town of Nunda with the understanding that they can purchase more land in the future. Gelser hinted that this is a distinct possibility.

“This is a good end to a long story,”  added Gelser, “but it’s just the beginning. This site is an opportunity to expand further.” 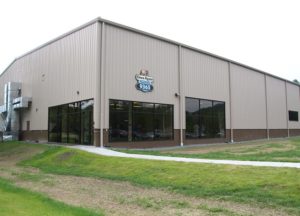 The facility as visible from Rte. 408. (Photo/Conrad Baker) 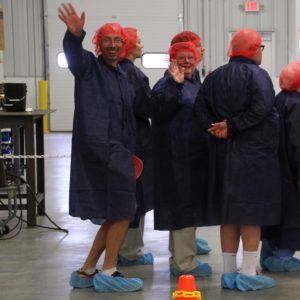 Happy visitors on a tour of the new facility. (Photo/Conrad Baker) 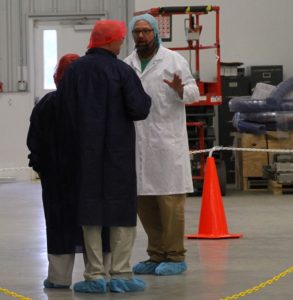 Visitors take a tour of the new facility. (Photo/Conrad Baker)