LIVINGSTON COUNTY – Government gridlock is upsetting the future of $8 million in sales tax that officials claim the County depends on.

County Administrator Ian Coyle reported to the County Ways and Means Committee Monday afternoon that a bill allowing the County to collect one percent of sales tax, which the New York State government has historically re-passed every few years as it expires, is now in limbo. The State’s legislature is now in recess with no date set for when it will start again.

County officials re-iterated that the process of re-applying for this one percent of sales tax puts counties in a position to lose millions in annual revenue and would like to see the process changed.

Coyle said that 53 counties depend on the routine passing of these bills to continue to bring in millions of dollars in sales tax.

Coyle has his own theories about what this year’s exceptional gridlock is about.

“The timing is a bit suspect. Is it really just about mayoral control in the Assembly?” said Coyle. “Or is it the fact that we now have the senate advancing the health care legislation at the federal level which includes a requirement that the state cannot charge counties for Medicaid, which obviously the state would then have a 2.3 billion-dollar hole starting in 2020?”

For now, Coyle is planning on the County receiving the $8 million and will budget for 2018 presuming so. 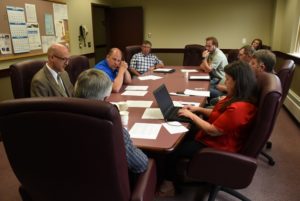